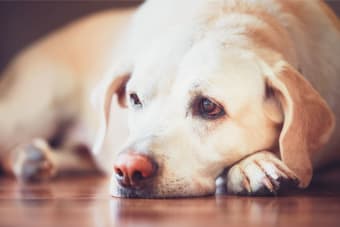 When an unusually high number of inflammatory cells end up in a dog’s stomach and/or intestine, inflammatory bowel disease (IBD) can become an issue.

These cells cause changes in the lining of your dog’s intestinal tract, which impair the normal absorption and passing of food.

IBD can be challenging to diagnose and dogs may have many of the same symptoms you'll see in other serious illnesses.

Though symptoms may appear similar, IBD is not the same as irritable bowel syndrome, which is caused by psychological stress as opposed to physiological abnormality.

Causes of IBD in Dogs

It’s unclear what causes IBD, as it’s not decided whether to classify it as a disease or a defensive response to other conditions in the body. Contributing factors may include an abnormal immune system, bacteria, parasites, genetics, or food allergies.

Vets can often have difficulty determining the disease’s underlying cause in a specific animal, so future care may be based on how your dog responds to different treatments.

Signs of IBD in dogs

Keep in mind that clinical symptoms may come and go, and part or all of the gastrointestinal tract can be impacted.

If your dog is displaying the symptoms above, book an appointment with your veterinarian. Because these symptoms can indicate many conditions or illnesses (including serious ones) it’s important to have your dog evaluated and tested.

Biopsies are usually performed only after other conditions that could be causing your dog’s symptoms such as organ diseases or parasites, are ruled out. After your vet performs the biopsy, he or she will know the type and quantity of inflammatory cells in the intestinal wall.

There is no cure for IBD, but your vet can prescribe medications and changes in diet to control it. There may be a trial-and-error period involved in finding the right combination of food and medications to manage the disease.

You and your veterinarian will need to work closely so that any required changes in routine can be made safely. One bright spot is that some dogs are eventually able to stop taking medicine daily and may need it only when they have bad episodes.

Diet for a dog With IBD

Many dogs will respond well to dietary therapy. While there is no specific food that’s ideal for every case of inflammatory bowel disease in dogs, we recommend diets with:

Dogs more easily digest some food than others. Especially if your dog’s GI tract is inflamed fiber and fat will likely be more difficult to digest. Food that’s high in moisture will probably be easier to digest than a dry diet.

Very simple food, without many additives, is likely best. Additives that can potentially cause an immune reaction should be avoided.

Proteins in dairy, chicken, wheat, and beef are most likely to cause a reaction in dogs with IBD, which may be an immune system reaction to food.

Part of the logical approach to treating IBD in dogs is choosing foods without common food allergens that will aggravate the disease. This is because when a dog eats a protein he’s never had before, the immune system won’t be triggered to react.

How Long Dogs Can Live With IBD

For dogs that have a confirmed diagnosis of inflammatory bowel disease that’s treated effectively, the prognosis is generally good. Many dogs will remain on their prescribed medications or food for life, though it may be possible to reduce the dose of medications over time, with supervision from your vet.

Depending on your dog’s circumstances, he or she may be able to stop drug therapy. While most dogs do well for many years, others require changes in therapy or treatment every few months. Unfortunately, some dogs will not respond to treatment.

Because some severe forms of inflammatory bowel disease in dogs can eventually progress to intestinal cancer, it’s important to have IBD diagnosed, managed, and closely monitored as soon - and as much - as possible.

Note: The advice provided in this post is intended for informational purposes and does not constitute medical advice regarding pets. Please make an appointment with your vet to accurately diagnose your pet's condition.

Is your dog showing signs of inflammatory bowel disease? Contact Our Astoria Vets to have your pup diagnosed and treated.

At Steinway Court Veterinarian, we are always accepting new patients. Our vets are dedicated to keeping pets healthy and happy in our Astoria clinic. Contact us today to book your first appointment.